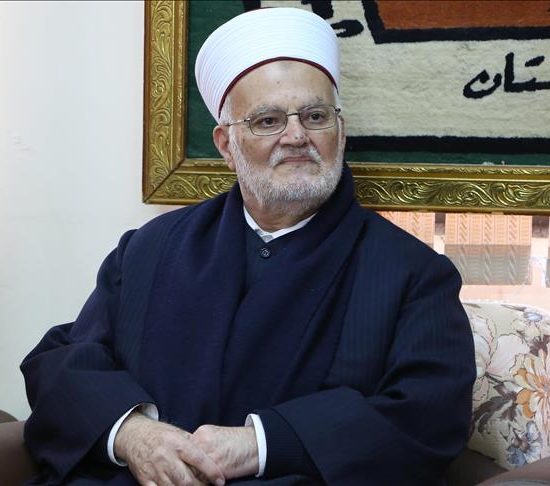 Sheikh Ekrima Sa’id Sabri is a terrorist-supporting, Holocaust-denying anti-Semite whose extreme political views are amplified by his position as a religious authority.

He is also known as Ikrimah al-Sabri or Ikrima Sabri.

Sabri was appointed the Grand Mufti of Jerusalem by Yasser Arafat in 1994 and served in this position during the Second Intifada. He was removed by Palestinian Authority President Mahmoud Abbas in 2006.  Being removed by the man who said, “we welcome every drop of blood spilled for al-Aqsa”, demonstrates the reality of Sabri’s radical views.

He was a prominent leader involved in the recent Temple Mount clashes over the metal detectors and the current escalation of the battle over the opening of the “Gate of Mercy.”

The “Gate of Mercy” was until now a closed compound of the Temple Mount. It was opened illegally by the Muslim Waqf as part of the Palestinian struggle to change the status quo on the Temple Mount. The compound has been closed since 2003 by order of the Commander-in-Chief after it was determined that Hamas activity was taking place there. In 2017, a court order prohibiting a stay on the compound and its operation was added.

Sabri is one of the chief instigators of violence against Israel, the Jewish people and their allies.

He publicly supports terrorist attacks including suicide bombings, publishes fatwas and articles on these issues, calls for violence “for the sake of the Al-Aqsa Mosque” defining it as a “religious duty”, and rewrites history through his denial of Judaism’s Temple Mount claims and the Holocaust.

He has made explicit calls for action, such as calls for the masses to come to the Temple Mount to “protect” the mosques, which have undoubtedly taken a toll on human life.

There is universal consensus on the link between incitement over the Temple Mount issue and terrorist attacks today.

Ekrima Sabri has been arrested on multiple occasions and has been repeatedly banned from entering Al-Aqsa Mosque on the Temple Mount compound for ‘incitement and participation in protests’. In response, Fatah decided to hold a rally of solidarity with him in Jerusalem, but the rally was banned by a restraining order.

Sabri has been banned from entering the United Kingdom and France as a result of his inflammatory statements.

On his public encouragement of child martyrdom:

In an interview with Al-Ahram Al-Arabi, an Egyptian national newspaper, Sheikh Sabri said, “There is no doubt that a child [martyr] suggests that the new generation will carry on the mission with determination. The younger the martyr – the greater and the more I respect him… They [mothers of martyrs] willingly sacrifice their offspring for the sake of freedom.”

These statements on child martyrdom were made just two days after the first known suicide bombing carried out by a Palestinian child when the child blew himself up at an Israeli checkpoint.

In addition to his public praise of child terrorists, the vast majority of Palestinian child suicide bombings happened during the Second Intifada (also known as the al-Aqsa Intifada) when Sabri was the highest authority on Islam in Jerusalem, as both the Grand Mufti of Jerusalem and the head imam of the al-Aqsa mosque.

On his incitement of violence against Israel and the Jewish people:

The Pal Info website affiliated with Hamas, recently published Sabri’s statement that called on the Muslim masses to march on Temple Mount in correlation with the Jewish observance of Tisha B’Av, a day of mourning marking the destruction of both Solomon’s Temple by the Neo-Babylonian Empire and the Second Temple by the Roman Empire in Jerusalem, to stop the “invasion of Jewish extremists” to the Temple Mount. This is a call for violence – clear and simple.

This was just two months before the Second Intifada began. The intifada started from al-Aqsa, incited by Sabri, after Israeli MKs visited the site. Despite the Israelis receiving permission and assurances from Palestinian leaders that they could visit in peace, religious leaders like Sabri used inflamed rhetoric to provoke the Palestinian people to carry out a four year campaign of terror and violence against Israel which saw more than 1,000 Israelis (mostly civilians) killed at the hands of Palestinian terrorists, including over 140 suicide bombings.

When speaking about the political situation on the Temple Mount in a 1999 interview, Sabri stated, “If the Jews want peace, they will stay away from Al Aqsa. This is a decree from God. The Haram al-Sharif belongs to the Muslim. But we know the Jew is planning on destroying the Haram. The Jew will get the Christian to do his work for him. This is the way of the Jews. This is the way Satan manifests himself. The majority of the Jews want to destroy the mosque. They are preparing this as we speak.”

On his hatred of Jews and Anti-Semitism:

In an interview with Al-Ahram Al-Arabi, an Egyptian national newspaper, Sabri stated “I enter the mosque of al-Aqsa with my head up and at the same time I am filled with rage toward the Jews. I have never greeted a Jew when I came near one. I never will. They cannot even dream that I will… they are the most cowardly creatures Allah has ever created…”

In a sermon broadcast on Voice for Palestine Radio, Sheikh Sabri called Jews “the descendants of apes and pigs”.

In a New York Times Magazine interview with Jeffrey Goldberg about the Temple Mount, he said “If the Jews want peace, they will stay away from [al-Aqsa]…This is a decree from Allah. The Haram al-Sharif [Temple Mount] belongs to the Muslim. But we know the Jew is planning on destroying the Haram. The Jew will get the Christian to do his work for him. This is the way of the Jews. This is the way Satan manifests himself…”

On 20 February 2005, Sabri appeared on Saudi Arabian Al Majd TV to comment on the assassination of Rafik Hariri, the former Lebanese Prime Minister. Sabri stated, “Anyone who studies The Protocols of the Elders of Zion and specifically the Talmud will discover that one of the goals of these Protocols is to cause confusion in the world and to undermine security throughout the world.”

On his denial of the Holocaust:

While being interviewed by the Italian newspaper la Repubblica in 2000 before a meeting with the Pope, Sabri answered a question about the Holocaust by stating, “Six million Jews dead? No way, they were much fewer. Let’s stop with this fairytale exploited by Israel to capture international solidarity. It is not my fault if Hitler hated Jews, indeed they were hated a little everywhere. Instead, it is necessary to denounce the unjust occupation endured by my people.”

On his calls for the destruction of Israel’s allies:

Our intention is to forbid Sabri from entering the city of Jerusalem, banning him and his rhetoric from inciting violence and supporting terror against Israel.

Defend Jerusalem has issued a legal letter requesting information to initiate an investigation into his legal status in Israel.

Ekrima Sa’id Sabri is a resident of Qalqilya, a Palestinian city in the West Bank.

It is not clear how he can stay in Jerusalem at all. With no legal status or residency in the city, his presence there is illegal. He must be immediately expelled from Jerusalem and forbidden to reenter.