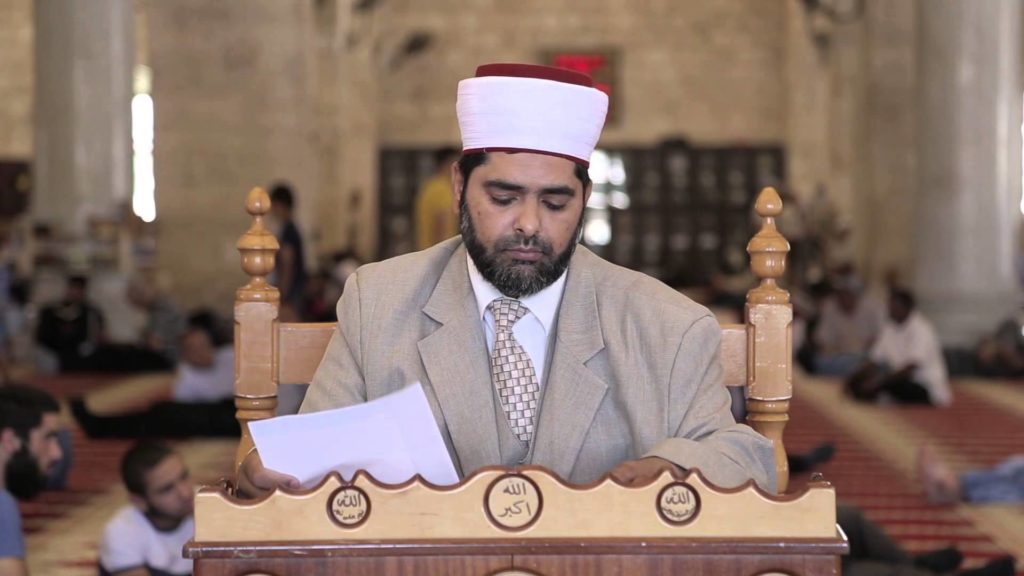 Sheikh Omar Al-Kiswani is the director of Al-Aqsa Mosque.

His position renders him formally subordinate to the Waqf, the Islamic religious trust which controls and manages the current Islamic edifices on and around the Temple Mount.

The Waqf is ostensibly under Jordanian control, although the Palestinian Authority has great influence over it.

In practice, he is also subject to the Supreme Muslim Council, which is now a de facto PA-controlled body.

Al-Kiswani is often interviewed and expressed in the Arab media, including on sites affiliated with Hamas. He uses this platform and his religious authority to spread incitement with an emphasis on spreading conspiracy theories about the Temple Mount, such as the plot that Israel conducts excavations under mosques there which may lead to their collapse.

He is part of a culture and system of ranking leaders and religious officials that deals in incessant provocation around this matter, and unfortunately, this incitement costs human lives. The destructive effect these messages have on civilian lives is a proven and undisputed fact.

This propaganda and incitement have led to horrific terrorists plotting attacks against Israelis and the Israel Defense Force. Terrorist groups seek to establish an Islamic army in Jerusalem and conquer Temple Mount.

They rely on a false narrative established decades ago that denies the Jewish people’s historic and religious rights to the city and the land. Voices of religious leaders such as Al-Kiswani lend fuel to these dangerous flames.

Just recently, he was interviewed on Hamas’ Pal Info website where he said that the ‘Ribat’, an Arabic term for fortress or defense, in the Al-Aqsa Mosque should be increased.

‘Ribat’ is a halakhic-Islamic term that in this use can be interpreted as an explicit call for violence. It is a term commonly used by extremist groups such as al-Qaeda, and in reference to Palestine, its direct meaning is a place of conquest and jihad.

If he was, by contrast, a Jewish rabbi from the settlement, he would be in custody now if only for this offense.

Therefore, limiting his movement and influence (and if he is not a resident of Israel, even his expulsion from Jerusalem) will be a blessing to all those who fight to protect and defend the Holy City. It will also send a powerful message to the extremist enemies that threaten Jerusalem’s past and future.

Defend Jerusalem is waging a legal war against Omar Al-Kiswani.

We intend is to forbid Al-Kiswani from entering the city of Jerusalem, banning him and his rhetoric from inciting violence and supporting terror against Israel.

Defend Jerusalem has issued a legal letter requesting information to initiate an investigation into his legal status in Israel.

Omar Al-Kiswani residency status in Israel and the City of Jerusalem is unknown.With no legal status or residency in the city, his presence there is illegal.

He must be immediately expelled from Jerusalem and forbidden to reenter.